Dustin Johnson is good, but Brendan Todd and Boditrak are better!

Dustin Johnson won again. We saw his swing last week, so let’s checkout something else… I’ve done a lot of talking about the Boditrak mat and all the cool things it can show me, but haven’t be able to show much…until now. The Boditrak mat is still pretty new in the golf biz (There’s only […]

I’m sure you’ve heard the tip, “bump” your hips to start your downswing. While this is a relatively correct statement, the purpose is usually lost in translation. While many know that you have to bump your hips, very few know why or what it does, so let me explain. The bumping of your hips in the […]

The move that won Dustin Johnson the US Open…

It’s no secret that Dustin Johnson is long… really long. He is currently leading the PGA Tour in driving distance and this week at the US Open, averaging a meek 316 yards, but maybe more impressive was his ability to hit it in the fairway. He tied for 18th in fairways hit for the […]

Brooke Henderson vs. Daniel Berger – Not So Different

Backswings: The club don’t matter One of the more common questions that I get from students is “where should the club be in the backswing.” Common thought and past instruction would teach that the club ideally needs to get into a parallel position at the top. Short of parallel in the student’s mind seems to […]

Charlie Hoffman – Swing it with the big Muscles

I’ll admit, I had to scramble to get this video done. After Speith ran off four straight birdies I promptly made a video about “how to win even though your hitting it poorly.” Then the wheels fell off. Nevertheless, Danny Willett is a deserving Champion. Coming into the week he was ranked #12 in the […]

Much has been made about Adam Scott over the past three or four years concerning the use of his long putter and how it would negatively ( or positively) effect his game. I was never a big fans of the USGA’s ruling to ban the anchored putter and it seems more evident by every decision […]

If you’re at all like I am, you get quite a kick out of watching the PGA Tour players struggle from time to time. Sure, it’s awesome to see them hitting huge drives, close approaches and shots most of us can only dream of, but once in a while it’s fun to see them look […] 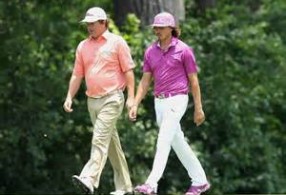 For the first installment of #What Winners Do, we’re going to take a look at two champs from this past week, Jason Dufner and Rickie Fowler. Anyone who watched the live telecast can identify which area of their games brought home the trophy… CHIPPING. Early every golf season and right after the Seahawks finish, I […]